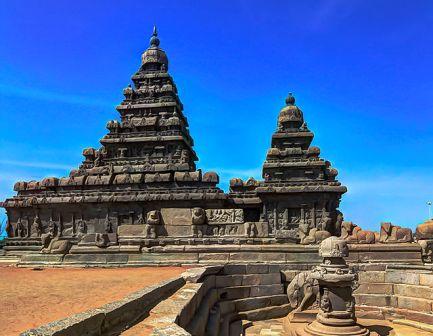 The Pallavas ruled from AD (600–900) and their greatest constructed accomplishments are the single rock temples in Mahabalipuram and their capital Kanchipuram, now located in Tamil Nadu

Pallava art and architecture represent an early stage of Dravidian art and architecture which blossomed to its fullest extent under the Chola dynasty. The first stone and mortar temples of South India were constructed during Pallava rule and were based on earlier brick and timber prototypes. The earliest examples of Pallava constructions are rock-cut temples dating from 610 – 690 CE and structural temples between 690 – 900 CE. A number of rock-cut cave temples bear the inscription of the Pallava king, Mahendravarman I and his successors.